I am delighted to say that a dear colleague of mine has ‘kicked my arse’ in the nicest possible way. Here is what Helen Mitchell has to say. I have edited out the friendly banter and more personal stuff with her permission.

“I did visit your blog site after reading your last email. My own experience has been very different to yours ­ I grew up in a Christian home (my father, now retired, was a minister of a Free Methodist Church). What struck me about the Christian people I knew growing up, was the reality of their Christian experience in practical terms. I saw no contradiction between what they claimed and how they lived.

I have read the bible from cover to cover many times and find it difficult reconciling the image of God as a bully with the picture emerging from the New Testament, of a God who loves the unlovable and suffers for the sake of all ­even those who reject Him.

For me being a Christian has never involved an unreasoning abandonment of rationality or logic ­ quite the reverse. I know the arguments for and against the existence of God in philosophical terms and am familiar with the stance of ‘new atheists’ such as Dawkins, and those who argue that there is no room for God in a post Enlightenment world of science. Clearly God will never be found at the bottom of a test tube, but there are many leading scientists and scholars who find no conflict between their Christian faith and their thinking/ rational minds or the scientific evidence available­ although they don’t receive the same levels of media attention in the popular press.

So although some may claim that my belief in God is nothing more than a leap of faith, I would acknowledge that whilst it might well be a leap of faith, it’s not a blind leap. And for every Christian long jumper, there are atheists on the opposite divide making similar leaps. Aside from all other considerations, the reality of what I have experienced day to day, even when life has been really difficult, is testimony I can’t ignore. So my sentiments are very different from those expressed in your blog and by other contributors.

I want to tempt my general readership (uninterested in speaking machines) to visit my new blog (all about such things) and have a go at my caption competition. Go on! 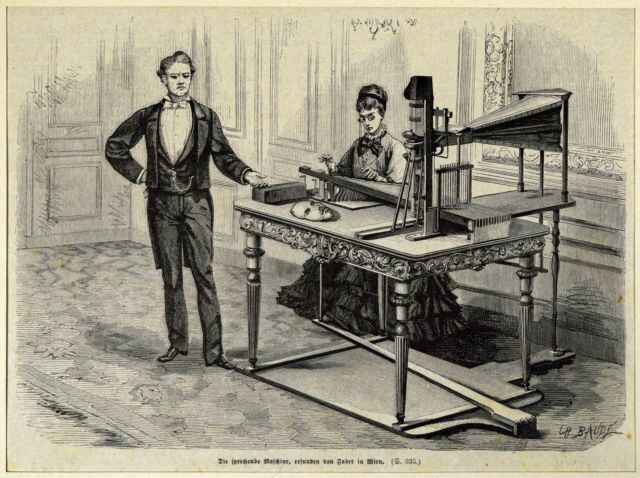 I seem to be having a nostalgia flush. Bit like a hot flush but it lasts longer and in my case starts in about 1966. As I explained the trigger was the prolonged rat pursuit and uncovering a whole bunch of old bits and pieces in the loft. I think in the past I have avoided nostalgic thoughts as they can be painfully engulfing if you let them, but nostalgic things seem altogether more manageable. The vapours have spread through to my shopping habits and a new preoccupation with repairing or replacing things that evoke memories but are incomplete or broken. Intriguingly one of my discoveries is a pigeon lamp; a turn of the 20th century french oil lamp guaranteed not to explode (F10,000 if it did). Surprisingly some French chap actually has the requisite spare parts – he chose to write to me in French to which I responded in Frenchlish – laughable but not Googled. – we have a deal and the part is winging its way as we speak. I have bought a couple of table ciggy lighters as you know – one is a close to one I coveted as a child belonging to my nan. The thrill is in the weight, substantial and the flame, lethal and exceedingly unpredictable. I have also bought the most marvellously drab card of the village I was born in depicting virtually nothing except some bloke in a hat lying down on a hill – as I think I know the spot – subsequently developed – I find it weirdly dreamy and haunting. I have also located the Radio Times from the week I was born. I want to write a piece on what was on telly when I came into the world. I am acquiring an obsession for mermaids. My dear friend Barry has leant me a book on the subject, only he would have one, and I have since found some ‘scientific’ photographs of the real thing. I did not know they really existed. I could at this point say something about the evidence for God being less convincing but far be it from me to mock.

Talking of strange encounters with friendly Europeans, I have struck up a friendship with a Romanian courier who delivers to us. When I say friendship, we talk about his car, which broke, his country, which sounds lovely and his girlfriend who cannot sew (what are women coming too) – anyway he caught sight of Maria’s sewing machine and proposed on the spot that she may care to fix his trousers – to which Maria was somewhat taken aback – he insisted on paying – she declined – he insisted – they agreed on £5. She then rethought and decided she had no desire a) to do the job at all, however she was sort of trapped by friendliness b) to take money for it – so instead she would request a Romanian delicacy eg. a local sausage. Fortunately she realised just in time that asking him for a piece of his Romanian sausage may send out a misleading signal and potentially attract non sewing orientated kind of business to our door. Anyway this has yet to be resolved but the trousers have arrived together with detailed specifications, a name ‘Anton’ and a telephone number – I am sorry the whole thing feels like a plot for a Brian Rix farce.

Love and freedom to all

He cannot have done anything wrong he’s a vicar, a banker and a politician.

I heard Lord Green (once in charge of HSBC) defended by a Conservative elder on the basis that an ordained minister could not possibly have done anything bad. It seems that circumstances have provided me with a model arch enemy. Someone who is a banker, politician and a vicar. Rather than attacking this maligned bloke with all guns blazing I will seek only to make this point.

The establishment, composed of mainly middle class, middle aged, white males, with too much money, power and too few scruples really does exist and must be challenged by whatever peaceful means lie at our disposal. There are ways to do this that don’t involve the largely ineffective ballot box, but for now it is probably sufficient to just reflect on that when the establishment tries another of  its cunning ploys to con you or very often in the case of HMRC threaten you. Talk about dual standards. I remember when I started out in theatre I got paid £3,000 gross for a whole year the tax office demanded £60o of that!

1100 super wealthy tax dodgers and one conviction! I am sorry to come out with the old cliche but it really does seem to be the case that if you steal  a purse you go to jail but steal a few million and you get away with it. I wonder why that is. Could be something to do with class. Still Lord  Green is a vicar so he didn’t do anything wrong for sure.

Read Emma Goldman and Russell Brand – both nuts but wise.

I admit it, I do not practice what I preach. The more I encounter those that do, the more I am deflated by my own lack of conviction about anything.

The trouble is I am lazy and selfish – for example –

In principle I should be a vegetarian. I love animals and can’t really justify eating them but I just can’t be bothered to think the necessary deep thoughts required to buy and prepare vegetarian food. Despite Maria’s influence, food is still mainly about consumption, not preparation in my mind. More seriously – as a family we really should give more of our wealth away. I was really depressed by the Radio 4 programme that discussed this concept. https://www.bbc.co.uk/programmes/b050yh99 So depressed I had to turn it off. It showed just how wealthy me and my family are. In global terms in the top one percent. ( can’t remember the exact stats so don’t quote me – instead listen to the programme if you can cope with the guilt) I believe they said that someone earning £13,000 per year is in the top 10% so there really is no excuse – it’s actually pathetic that I feel so bound to make one – something along the lines of ‘ensuring the family’s future’ , preparing for a rainy day and all that bollocks. BUT yesterday I spent £5.00 on a vintage Ronson table lighter from Ebay, that I certainly have no need for, that necessitated the additional purchase of fuel and a wick and all that dosh could literally have been spent on saving lives, at least according to Radio 4. I really cannot justify this. I despair…..but oh so briefly…….

… now where was I, oh yes Amazon Prime – that bath tidy rack we need so much. Any advice?