So I was wrong actually it sometimes starts with a place.

In this case it’s the place I was born and a slither through time from a nearby scenic hillside near the North Downs in Kent to the garden of a flat in Forest Hill.

I was born on a hill. It was posh enough to be called a ‘Rise.’ Across the road from us was a wood and until very recently I had no idea that during WWII the rise was a mooring point for barrage balloons. Despite never knowing this I repeatedly dreamt about them as a child and continued to  do so as an adult and yes they are the stimulus for several poems as well as a small collection of books and memorabilia – isn’t that wierd? Or rather – in a sincere but quizzical voice – is that wierd? Find out in an as yet to be broadcast episode of this blog. 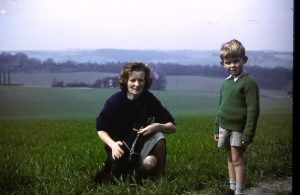 turn L at this 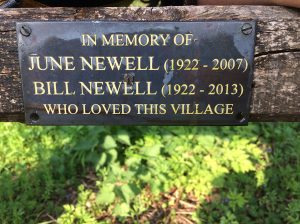 and keep walking up as high as you can go – swivel NW and there is London. For me as a child this WAS weird. My home was the bucolic idyll in which roads were paths and pavements were verges. London was somewhere, someplace else, Dixon of Dock Green lived there and he got shot, it sure wasn’t ‘just over there.’

Travel 50 odd years by Tardis (more about that in a later episode). My youngest and his loveliest rent a flat in 2018. The flat has a small narrow garden and a sliver of a splendid view out toward Kent. 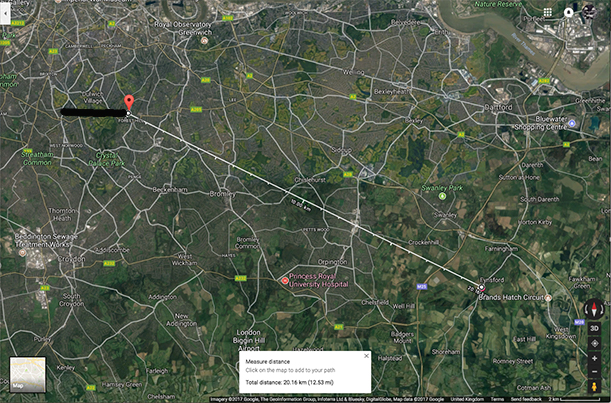 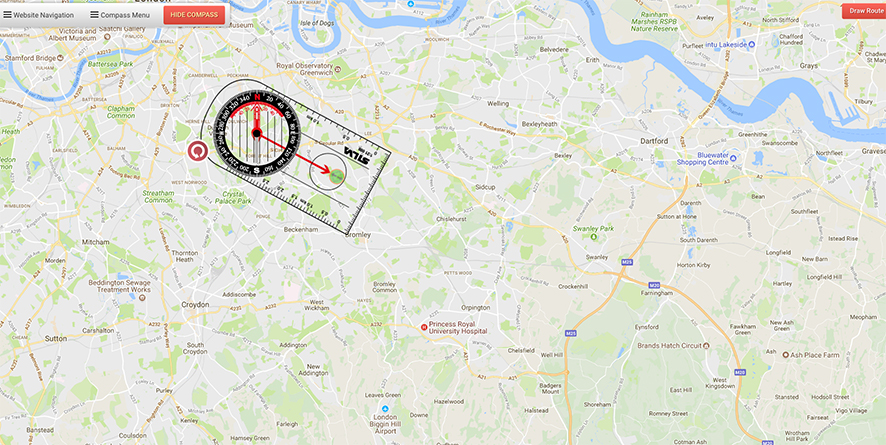 In the centre of the view is my hill 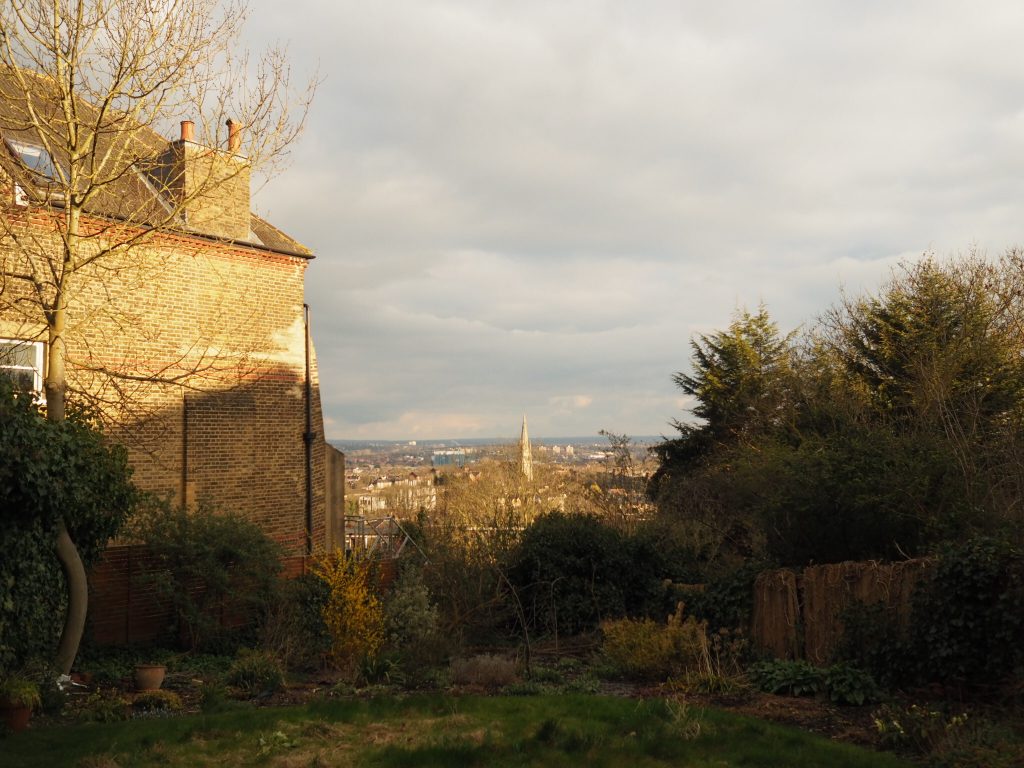 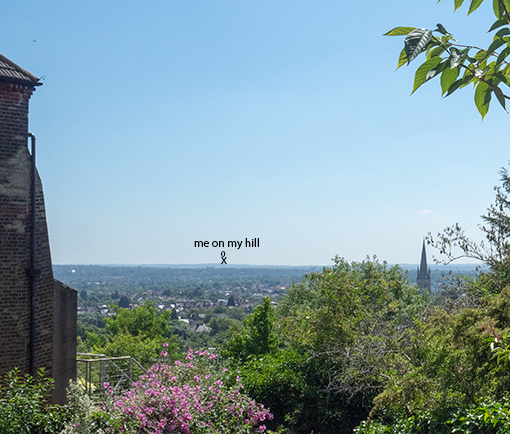 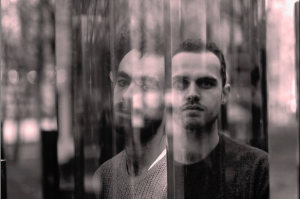 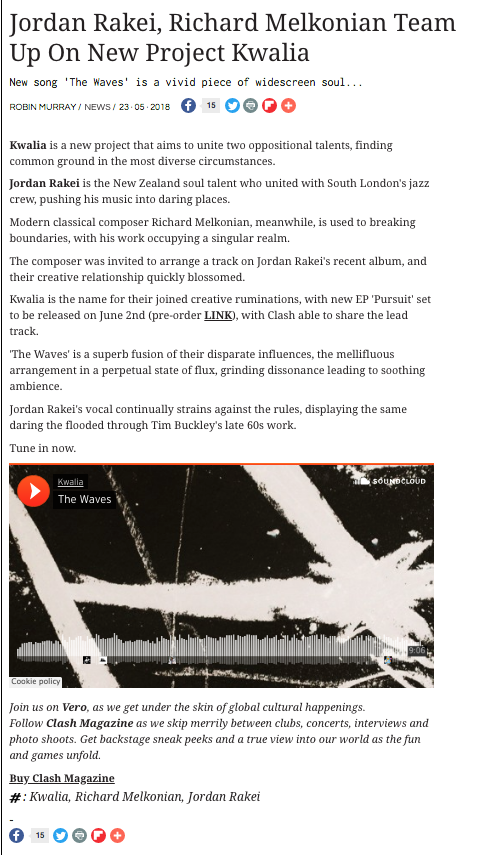 It always began with an object. 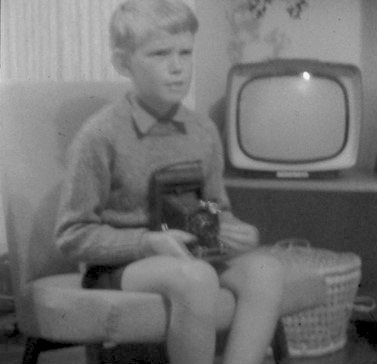 As a small child I Ioved old, solidly made things rather than toys. I particularly liked gadgets given to me by Uncle George (an ex army horse vet, marksman and collector of junk). Things like lighters, telescopes, musical instruments, oil lamps, cameras, radios, all the things I still love to play with now. He would just give them to me when we visited or send them to me for Christmas. I still have most of them. They had layers of dirt that were satisfyingly easy for an eight year old armed with a sharp screwdriver, a brush and a tin of Silvo to worry away at, to reveal polished brass, leather, silver, Bakelite and glass. I tackled dead insect grime, flints that had decomposed to a sticky grey dust, ancient hand-made screws that had not been loosened in 100 years, electronic components that had literally waxed away to a caramel gloop.  I was an avid and effective cleaner but I almost never fixed them. I could not be bothered to learn how, it seemed unimportant.

I still have this camera. It’s still broken. 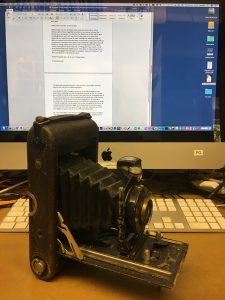 I liked to peer into the viewfinder (very tricky you have to do a  sort of sideways glance into a magnified tarnished mirror) and see a future that starred me as its inventor. The fact that the camera had no film did not stop me taking pictures and I still have those tucked away in my head nowdays appearing as a mediocre pieces of poetic nostalgia for nobody to read. As I say my efforts to restore lost functionality were incompetent but that didn’t matter as the goal was to transform these objects into something magical, usually some device with no relationship to the original, utterly meaningless to anyone but me, or if things didn’t go so well, a tin of small disconnected parts labelled ‘parts’. 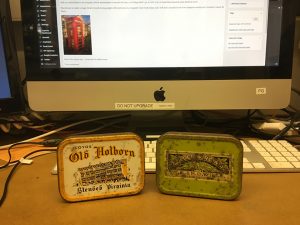 I still don’t actually know how computers work and I certainly cannot fix them. I cant be bothered to learn how… but the dream to make a magic future-transforming-object out of old junk still motivates my computer voice work today. 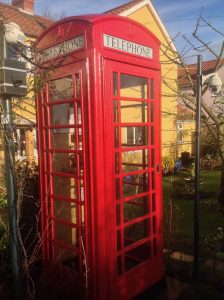 Hence the phone box – ah so now it makes sense.

I have been avoiding blogging. I just went off it. You know how it is like you go off smoked haddock or mutton. I don’t think I am back on it yet but when the news of my health is generally quite good I do feel more like sharing. Numbers went the wrong way last cycle which pissed me off because I had been quite ill on the treatment (usually a sign that it is working) and quite hopeful that I could be done with it in three cycles. Now the numbers are going in the right direction but I might need another dose to send my light chains back down to where they should be. I collapsed a week or so ago, 999 and whatnot (aborted after a heroic and mumbling-I-am-fine-while-not-feeling-it crawl to the settee), bare arse in the air, Jeremy Thorpe style, in front of my daughter-in-law (she will never erase the image of her father-in law on the bathroom floor deflated, damp and pale like a forgotten sun bleached swimming pool toy) but generally the chemo course has not been too bad. It’s a long time since I haven’t been awake and up by about 4:00 am but I don’t really mind that because me and the no-longer-feral-cat sit on the loggia drinking coffee watching the sunrise. It a favourite thing to do actually, it feels quite Angela Carter. I expect the trees to bleed golden wedding veils in time with my morning yawning and the cat purring.

Here is a truly disgusting photograph I am rather proud of. I am not sure which is more disgusting the meat or the drugs. 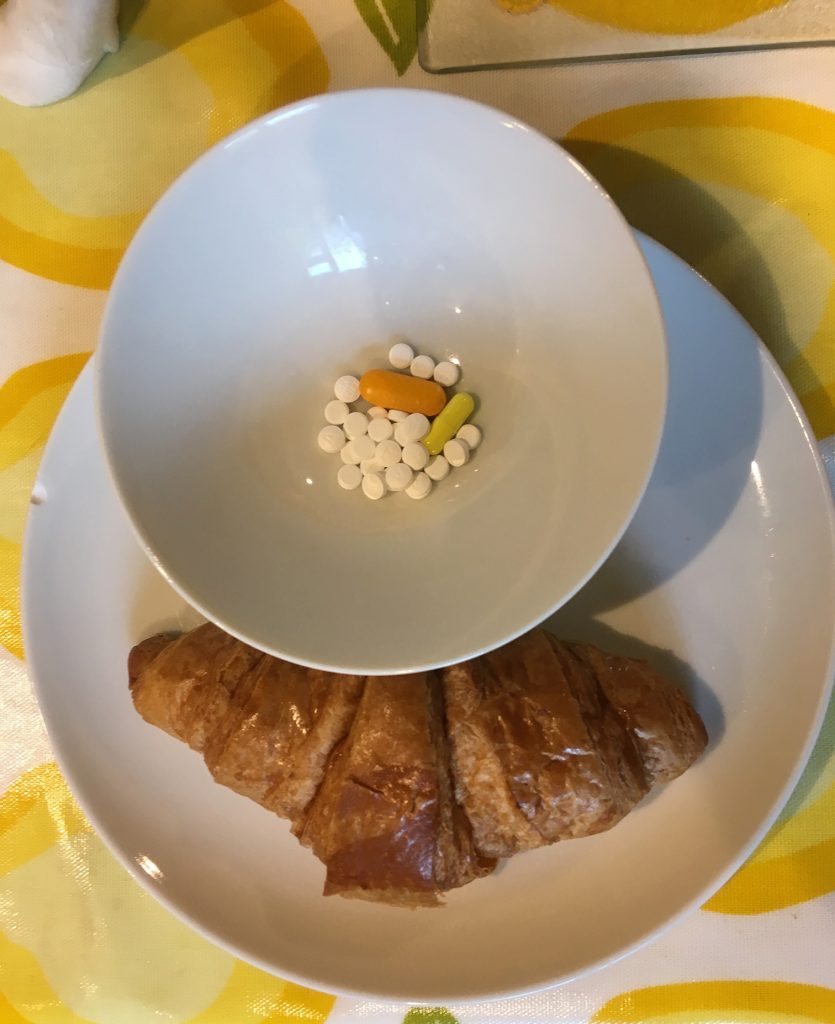 It would be so useful if you could predict your response to chemo and plan ahead but you can’t. I guess your body’s response to each dose is impacted by so many variables you are bound to get different experiences each time. In addition it may be a cumulative effect as it does appear to have a bit more impact the more cycles you have. The first one can be a breeze while the fourth can make you quite poorly. Then again sometimes your body seems to get used to it. In summary nobody can prepare you in advance  so you rely on the patience of family, friends and colleagues to just put up with whatever monstrous mood manifestation the chemo presents. Daily chemo life is framed by the uncertainty of how you might feel that particular day but you have to avoid prefacing every plan, invitation, commitment  with ‘well I will… BUT ONLY if I feel up to it.” Quite rightly people think you are making a fuss. Actually chemo is a great excuse for not doing the things you don’t want to do. Despite the potential for overuse, the chemo excuse still carries a good deal of weight – I still find the inhibited in the community will flinch at its mere mention. For example, I am obliged at the Uni to report every sick day and when I return to work I have to meet with my boss and we both have to fill in a form (a stupidly bureaucratic process) so when I took two days off after the Jeremy Thorpe arse in the air incident I duly reported my reason as ‘side effects of chemo’ – I could feel the admin staff digitally splutter as they reluctantly churned out the stock response the uni requires to such confessions. I strongly suspect that what they wanted to say was ‘shit! I am so glad that isn’t me! How does he cope? And why are we making him fill in this stupid form. Anyway I didn’t fill in the form and no one complained. Little victories – stick it to the man!

I have a few other things I want to talk about but instead of a giant post I will do several short ones over the next few days and weeks.