I started the telephone box project about 18 months ago and since then I have been avoiding a fairly fundamental technical constraint. You see – the sound going in and out of the telephone was not really available to me, well it was, but the way it was, was shoddy and incompetent to say the least. Imagine a conversation with an IPhone, that on a part of its journey gets relayed with a tin and string telephone, before transferring back to another IPhone – that was more or less what was happening. I had always hoped that I would be able to capture both the sound input and output and manipulate them, before returning them along with my real and synthesised voice, in ways to ‘surprise and enchant.’ (still struggling with that bit). Techniques for doing so existed, but none were designed for the ‘ancient and modern’ of my set up. I was sad and frustrated but remained strong and perky.

On and off for the last 18 months I have been trying different solutions – mainly archaic hacks using solutions designed for completely different purposes. Rather like trying to design a washing machine using a cheese grater and a copy of the radio times. YESTERDAY I HAD A BREAK THROUGH. The sound, hitherto trapped somewhere down the phone line, was digitally tapped and fell into my lap or rather emerged on a screen as a stream of incomprehensible code that I recognized as instructions to other software make noise. A few moments later sounds emerged from the telephone line that obeyed the instructions on the screen – HURRAHHH! To celebrate I took photos of my notes and my screen at that precise moment and here they are. 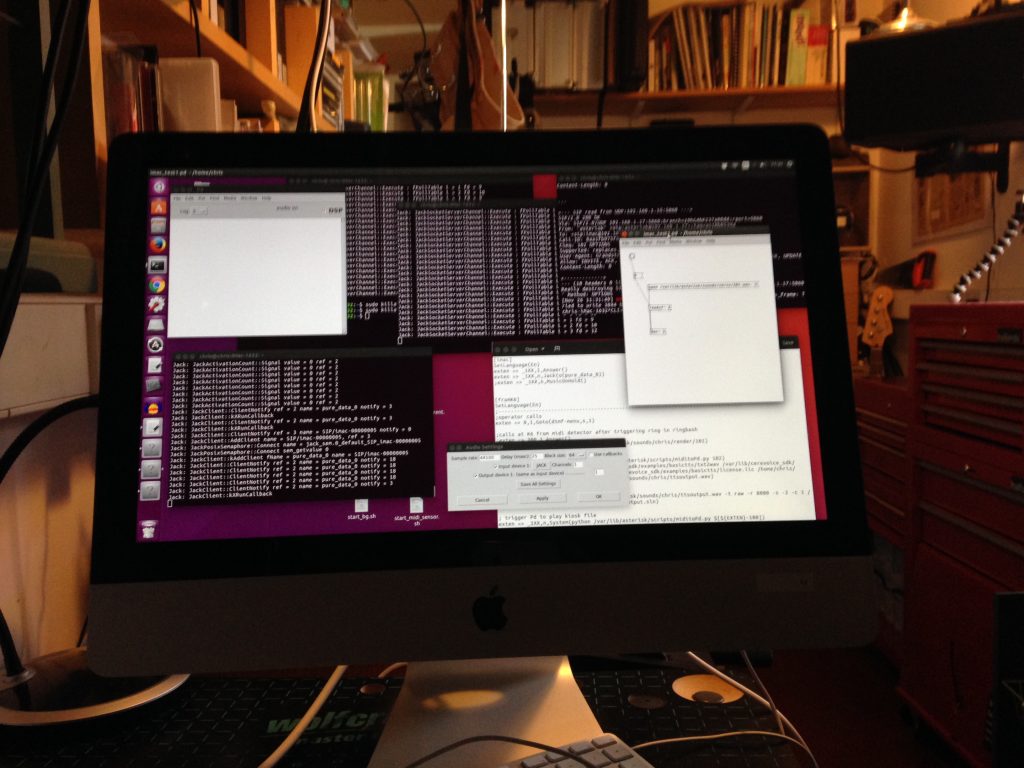 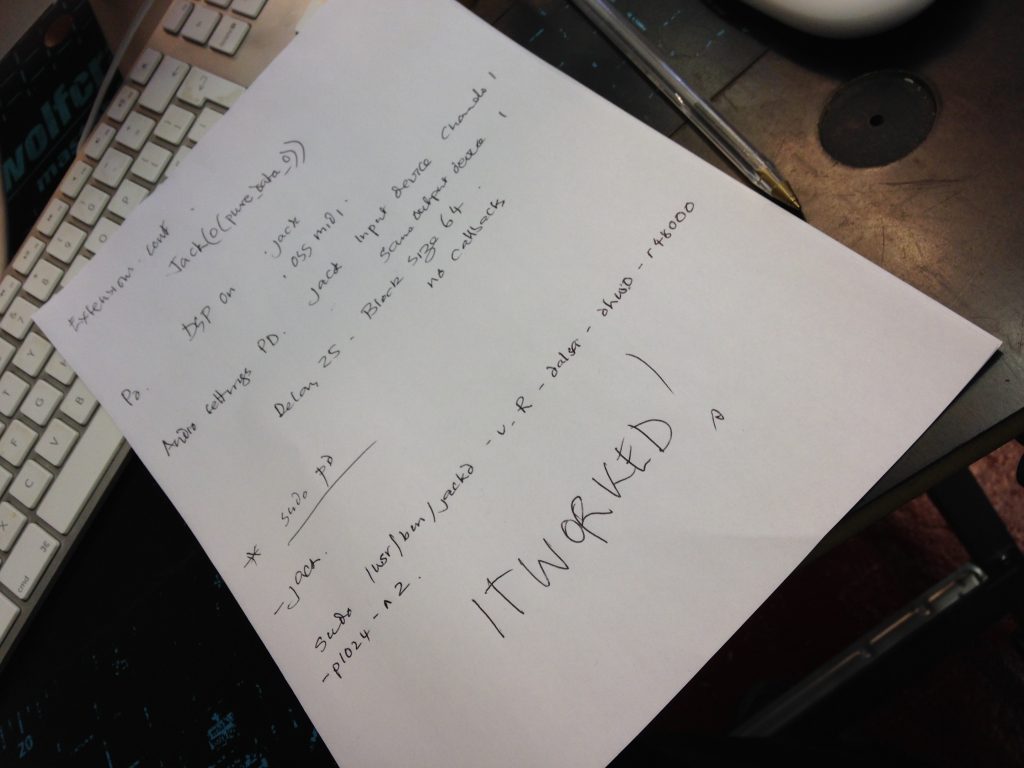 On Thursday Maria and I are off to the Royal Free so that I can run up and down the corridor – the bit I dread most, as my macho desire to impress often exceeds the capabilities of my wheezy form to progress at any thing approaching a non embarrassing speed. The enthusiastic words of encouragement the nurse provides unwittingly transports me to a cheering Mrs Hewlett at sports day, whose kindness did not allay my sense of crushing despair as I came second to last to my best friends excusable asthma, wooden leg, weight issue, rampant unsportiness. Pretending not to be out of breath afterwards is an additional challenge met in my case with lies, lies and more lies. Do you exercise regularly? – no! – note this is a lie because the true answer is neither regularly or irregularly as any exercise makes me feel sick, dizzy, depressed and a looser. In fact I despise exercise, the imperative to do it, the people who do it, the people who talk about it, the clothes they wear, the shops they shop in, the desperate Darwinian fight for survival they adhere to, the word, the concept and whatever is bigger than concept. This time I wont lie, as my green face at the top of the two flights of university stairs is beginning to cause alarm amongst the students who are reasonably convinced nee hopeful that I will die mid seminar anyway and who by the way have taken it upon themselves to assume my nut brown barnet is a cancer wig – cheeky sods – my crowning glory has probably retained its conkerness due to years of not being cut, the product of embarrassment about my flappers (don’t get me started) that kept me out of the hairdressers chair for 45 years. Oh how shallow I am, was, still am, less so than I was.

A confession. I consider this blog and my poetry blog to be quite important. Not to anyone other than me of course but I think I can say honestly that the two together constitute consummate ‘Chrisness.’ Should anyone in the future want to grow a new Chris then these outpourings together with the products of my loins should just about do the job. I have been troubled by the digital impermanence of these items – they are after all nowt but ones and zeros in sequences that happened to make sense today but in time will probably make no sense or worst will be reconstituted as some new digital Angel Delight. Low I was sent a vision and that vision was to turn both my blogs into printable books. 15 minutes later it was done by a wonderful free bit of software, sponsored by libraries and archivists across the world and thus were two weighty problems solved – my legacy in 15 volumes and your Christmas presents – Hark the Herald Angels sing!!! Seal up your letter-boxes, lest My Life in Art by Christopher Newell should fall mightily on the mat in advance of the twenty fifth day of this month.

I am joking but sadly not about the legacy bit I really did not want these rambles to evaporate – I consider this to show some not inconsiderable hubris. At last I have been able to write that word – been waiting years. Like Epiphany – it’s a word I have heard but have never had the courage to use.

Family life is quiet at the moment. George and Avani’s wedding plans are afoot – big time and I mean BIG – so exciting. Arthur and Lisa pretended to have a baby – a jolly jape none of us fell for but I must admit it made me broody. The three cats – yes its officially three – still fight and wee a bit. I have concluded the Mitch the original ginger one personifies something that Wittgenstein said about a Lion’s speech – that even if we could decode it we would not understand it – it’s world view would be profoundly incomprehensible to us.

I believe that Mitch believes Vincent (another ginger cat) to be Mitch. Not another mitch a doppelmitch or a twin mitch just Mitch. As a consequence he accepts him because in effect he is him. I have yet to prove this theory but his placid disregard and lack of interest in his rival points to something metacatical I am sure.

Boy am I annoyed – bile alert!

We have been living in a ‘post-truth’ media environment for millennia. To imply it is all the fault of Facebook is dumb dumb dumb. Ever since someone scratched ‘beware of the sabre toothed tiger’ on their cave door when all they had to subdue a club-wielding burglar Flintstone, was ‘tiddles the cave lap cat,’ the media, and we that feed the media, have lied, lied and lied. What greater lie is there than the nonsense contained in the Bible, Quran, Tora, The Daily Mail and all the other esteemed titles that have sought to profit from misleading the masses by spreading bigotry and lies. Trump is by comparison a mere pixie pinocchio. At least we can see him, touch him, blame him and hopefully one day someone will punch him. God is comparatively a slippery, hidey sort of fella. Never daring to appear in public, never daring to step in when things go bad, never daring to do bugger all – just standing on the side lines watching the world, he apparently created go into meltdown. What a nasty, vicious individual. If ever there was evidence for the non-existence, or if you prefer, meanness of god, Mr. Orange is it.

Ps Today I acquired my first musical lighter – yes it lights your ciggy and plays a tune while you die.

Avani our lovely, lovely future daughter-in-law (that will annoy her –tee hee) got her distinction in the MA in Creative Writing (Fiction) at the University of East Anglia confirmed this week. This is a massive achievement as UEA is world famous for this particular course – just google ‘creative writing alumni UEA’ https://www.uea.ac.uk/literature/creative-writing/alumni – Ain’t she clever!

So much going on I temporarily abandoned blogging for the emotional fray of real life.

Yet more pride and gush – My beautiful children are doing beautiful things.

We are so, so happy and excited and really, really looking forward to the wedding party. The whole engagement event in front of family members and friends was a rom com masterclass the details of which I will leave for them to reveal.

Arthur and Lisa had a fantastic gig at the Jazz Café in London that was packed out and totally brilliant. The Time-Out guy hosting the event was really complimentary. Nonna’s toilet mat made a star appearance and there were plenty of loyal Bovinos, Arrowsmiths and Newells in cheery attendance.

All in all a fantastic few weeks of total joy that had no impact on the goodwill extended from one of our cosy cat family toward our immigrant cat Vince. Much despised by Bobby he now hisses at everything including us when we feed him.

Psycho cat yes but we love him nonetheless.

I wrote Avani and George a song