I am feeling rather sober so nothing entertaining below. Maybe wait until the next one. 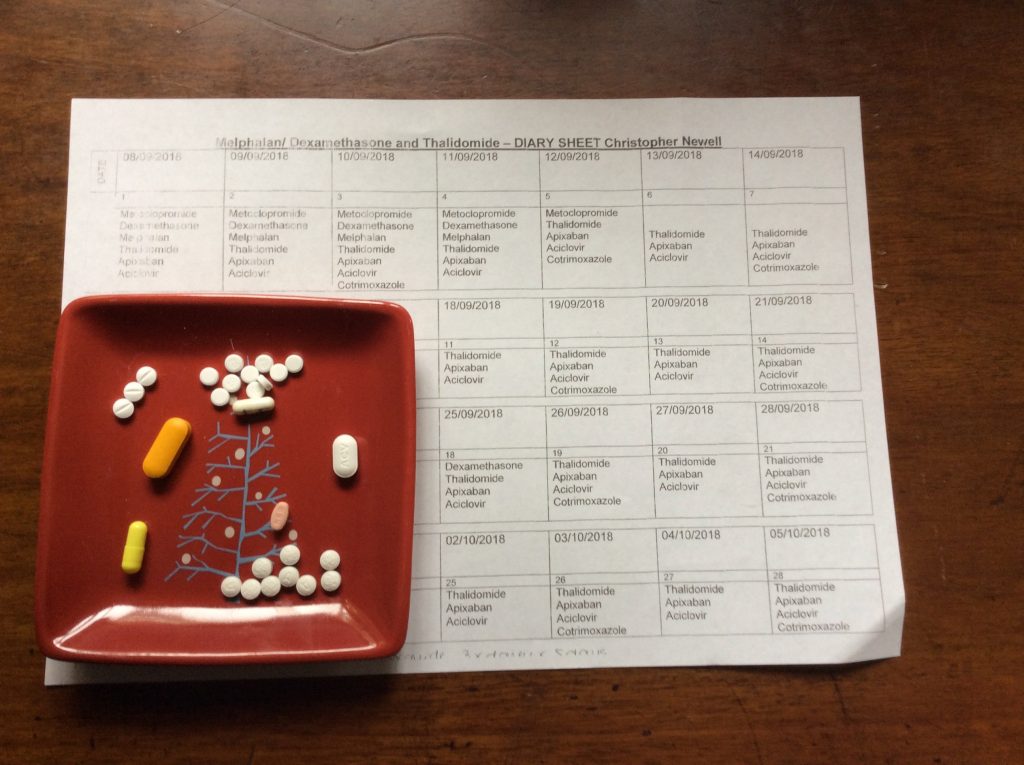 I don’t know why but I am rather proud of this. It is part of my drug schedule for the next month. I start today. One of the nurses agreed that I was winning the ‘consuming most drugs in one month’ award but I think she was humouring me. Nonna next door requires a small shopping trolley for her monthly quota, but I am definitely catching up. Surprisingly my drug banquet is indicative of good news. The amyloidosis is under control and my heart condition is now getting some attention, so with luck after three months of probable poorliness I might have a period free of so many pills. Won’t that be lovely. Meanwhile juggling the various doses and times necessitates Maria at my shoulder while I sit at a clear desk with all the bottles and blisters packs in a row ticking off my list. As I have overdosed two of three times in the past this precautionary measure is not over the top.

The uni are in the process of finding a temporary replacement for me for the next three months. I am not sure how this is going to work out but the principle issue is my depleted immune system and thus my tendency to pick up bugs. The next few months are bad for this because all our freshers go into totally irresponsible social overdrive and catch everything going which they pass on to us staff. So it’s best I stay away. I managed to catch two colds and two stomach viruses over summer so the indications are that I am a viral sponge at the moment. If I am assigned to desk duties that will be fine because I can work from home. On the other hand its a bugger because our course is recruiting really well and we have a new member of staff with some fresh ideas. It feels a bit like I am regressing to the start of my illness when I had to have tons of time off and wrote loads of poems but hopefully this will be a contained absence and you will be spared my delusions of bardeur. Aren’t I lucky to work in the public sector!

Other than this medical update I don’t have a great deal to report. The boys and girls are all good and busy. Maria will require counselling in order to deal with the fact that they may not all be a home with us on Christmas Day – as a seasonal jape I said let’s go to a Little Chef in Doncaster for Christmas lunch but she’s not quite at the stage of finding it funny  – my proposal to move Christmas to May and have a pole instead of a tree just made things worse. Frankly I could not give a toss about Christmas other than I want my family to be happy and to put the 40 x  full on 100 watt lights I bought at the car boot up on the balcony. So it looks like Me, Maria and Nonna in minus 10 and 1,0000000 lumens on a snowy balcony with a 24lb turkey and three cats. I will send you a photograph.

Talking of photographs I bought a 1960’s enlarger to go with my black and white film development kit. I am quite excited by chemical photography mainly because in the hands of the incompetent, it effortlessly introduces error into every stage of the process. 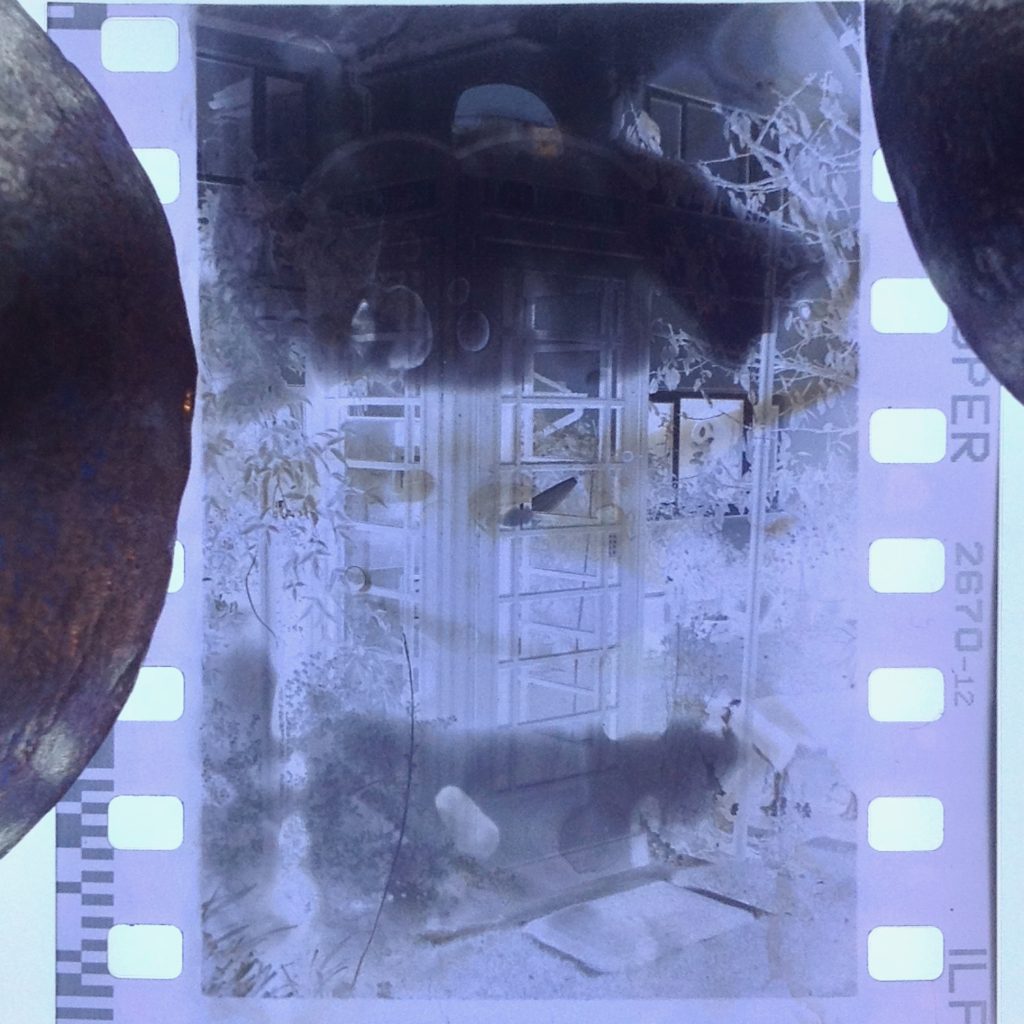 This is my phone box shot and developed by me.

The theme of error had fascinated ever since my ‘pretending to understand John Cage days’ as a teenager. My PhD research more or less equated to ‘err0r = liveness’ but this, sort of, turned out to be wrong but its the theme of this years Ars Electronica festival. 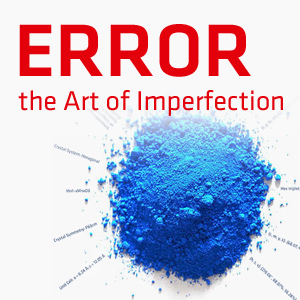 On another topic all together

Having thought for years that I was such an original in suggesting that patriotism, nationalism and the whole notion of borders protecting individual nation states is stupid, I discover that, ‘internationalism’ is a core tenet of Marxism. I found an article on the new internationale  and a contribution by Jacques Derrida on Wikipedia. https://en.m.wikipedia.org/wiki/Specters_of_Marx

‘For it must be cried out, at a time when some have the audacity to neo-evangelise in the name of the ideal of a liberal democracy that has finally realised itself as the ideal of human history: never have violence, inequality, exclusion, famine, and thus economic oppression affected as many human beings in the history of the earth and of humanity. Instead of singing the advent of the ideal of liberal democracy and of the capitalist market in the euphoria of the end of history, instead of celebrating the ‘end of ideologies’ and the end of the great emancipatory discourses, let us never neglect this obvious macroscopic fact, made up of innumerable singular sites of suffering: no degree of progress allows one to ignore that never before, in absolute figures, have so many men, women and children been subjugated, starved or exterminated on the earth’

Derrida lists 10 plagues of the capital or global system

Specters of Marx: The State of the Debt, the Work of Mourning and the New International (French: Spectres de Marx: l’état de la dette, le travail du deuil et la nouvelle Internationale) is a 1993 book by French philosopher Jacques Derrida. It was first presented as a series of lectures during “Whither Marxism?”, a conference on the future of Marxism held at the University of California, Riverside in 1993.