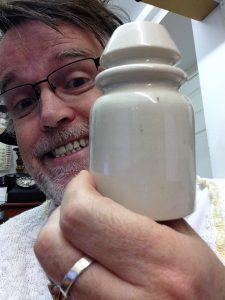 Kinda dull but I am pootling along just nicely. Same old same old.

My writing muse appears to have retired to a bungalow in Eastbourne with two poodles and a husband who collects home insulation manuals hence the long gap since my last post. Seriously for a moment – there really is a “telephone pole appreciation society” – https://www.telegraphpoleappreciationsociety.org I just wonder if they would be excited by the above item that I happen to own:

It is a ceramic insulator from a telephone pole. – but hold on -!-!-!- believe or double not, there is a collectors club for telephone pole insulators https://www.insulators.info – and yes they will soon be holding their AGM. There are many different types of insulators, some made of blue glass are rather beautiful and a few rare really sort-after ones which, strangely, look exactly like all the others. So the fictitious hobby I referred to in my opening sentence may really exist – oh to be a fly-on-the wall at the pole insulators AGM – material for a poem at the very least.

It is so easy to assume that collectors of weird stuff are themselves weird – its true of course. Everyone in the Telecom Heritage Group, of which I am a member, come across as courteous, intelligent, articulate and nice but on closer examination they turn out to be weird. It is the online conversations that generate so much heat around issues of so little consequence that betray the weirdness. Currently disagreements over validity, with regard to one members paper, on the number and placement of GPO man-hole covers in the 1950’s threaten to engulf the group in a controversy more vicious than ‘Trump’s wall.”

Speaking of shed heads – my word for men of a certain age who have brains like sheds . We have a new shed. Strictly speaking it is Maria’s but so far I have metaphorically ‘sprayed’ like Vincent our feral furry friend. It is now full of quite a bit of my ex Nonna’s garage stuff and thus has rekindled my interest in bikes, of which we have many –not riding them of course – but reviving them. There is very little as satisfying as oiling a seized up hub, freeing some rusted brake cables or best of all aligning gear sets when you are feeling blue which I am not (I hasten to add.)

Jeez I am boring myself with this old man domestic cosiness, it feels like an episode of ‘last of the summer wine’– (yes I met a man at the car-boot bearing a ferret – cutest thing ever – lives in the house, fully house trained – nice to children and dogs, highly intelligent but a little bit pungent) but the grim fact is I have nothing to share but stories of sheds, real and virtual and their residents. There is a lot of family news but I am keeping that quiet – all very exciting though – we hope.

Oh yes – I was in arms reach of the fabulous Jeremy Corbyn at a rally in York. Having sung my socialist credentials loud and strong, me, the boys, the boys friends and the girl went to ‘Bettys’ a famously overpriced tea shop in York where your cream jug is solid silver (not plate) and the jug of coffee would probably have paid for the rest of Jeremy’s leadership campaign. Highlights were the PA system, which looked like it was last used by Lenin and necessitated a good number of polythene bags thrown over it to protect it from the rain, as well as some Heath Robinson wooden scaffolding to stop it falling over and potentially eliminating some well meaning supporters and the man himself. He is not suave, cool or particularly articulate, not charismatic or slick just – true – and that will do for me and the loads of people who came out in York to cheer his somewhat muddled sentences ( a bit of a Prescott in that respect) most of whom were very young. He was charmingly preceded by a highly articulate Romanian young woman student who announced herself as ‘I am Romanian. I am one of the people who according to the Daily Mail, you should be frightened of.’ This was actually the best moment of the night. Some of the other socialist twaddle delivered by socialist priests was exactly that, twaddle. The food and the coffee in Betty’s was ‘divine darling’ – how we chuckled ironically as we tucked into £75.00 worth of posh Nescafe and listened to Cole Porter on the white grand. Left a big tip for the workers though – ra ra to red me.

Aha another bit of news – This Saturday the reformed family band is performing on the green outside our house. This promises to be a fun disaster as we have barely rehearsed – George and Arthur not at all – the rest of us old geezers are as utterly useless as ever- memory chasms, sausage fingers and nerves will no doubt litter the green like empty fag packets did on the Swanley School playing field after an afternoon of brutal humiliation and pretend smoking (no inhaling it makes you sick and cough stuff up in French).

Speaking of fags I occasionally fantasize about having one as a prop in those social situations where people ask me how I am, with a (plain speaking but deeply compassionate MacMillan nurse supporting the middle aged bloke staring out of a rainy hospital window in Sheffied advert) tone or when I just want to look cool – projecting something like the ‘who the gives a damn about cancer’, artist type – Leonard Cohen (alive –still smoking I think) springs to mind or Lou Reed (dead?). Maybe its time to refresh the image – a makeover perhaps – I admit to being weary of me – that slightly belly bloated, ill chap who has shrunk three inches in three years – I need to look creatively existential even when I am singularly failing to be so.

My teaching schedule next semester is very full and quite ‘challenging’ (which means teaching lots of stuff I know sod all about and thus will have to engage in significant study starting now!) but the new department is doing very well with lots of new students and a jolly staff team – it would be great fun if I did not continue to see myself as outside looking in. That won’t change so I best adapt to voyeurism.

I await the results of some non-invasive tests. Been down the tube yet again. Its beginning to feel like a second home. They should put inspiring poems and bra adverts on the walls like the real tube. Get the impression there is nothing much up just the usual super cautiousness. Once you are as ill as me they investigate every little change in your body – so a slightly extended nose hair can trigger alarm bells that result in yet another tube ride. Ahh me. The nurse who was slightly deaf was also deeply reassuring. She asked me what was wrong with me. I explained, she did not understand or possibly did not hear, anyway she asked if I was getting medicine, I said yes, she asked is it working, I said yes, she said well that’s all that matters isn’t it smiled and carried on with her paperwork – I felt a buzz of simple joy.

Talking of simple joy. Two of Maria’s friends came over and one was particularly and genuinely enamoured with the phone box installation – she really got it in a way that nearly everyone doesn’t. Suddenly the last year seemed like a good one. I have a fan. This is what she liked.