I looked back over my old posts and now recognize a direct correlation between illness and posting frequency. So I am happy to report a diminishing need to post. As cancer was really the main story, and as that is at the boring stage then I don’t have a lot to say. There is also a disproportionate animal content in my posts that probably point to that thing you do when you play games with small children – look around the room for inspiration – ‘I know lets play Eye (I) Spy. I Spy something beginning with H, yes that right, Hen.’ I will write about the Hens again – except they are bizarrely clean, quiet, polite, not eaten and in their pen. So instead –

Donald Trump is a smelly poo – That’s it for political commentary – framed in the language appropriate to his intellectual capacities which really do appear to be those of a spoilt, cantankerous three year old.

What a shame it’s not funny. If ever there was an argument that no government is better than bad government, he makes it.

This picture would actually make an amazing Caravaggio or alternatively a Francis Bacon. What would you call it? – ‘Trump thanks god for Trump and a bunch of hypocritical arseholes agree’

I am actually revolted by this picture. It is pornography of the worst kind – God, power, corruption, greed and hypocrisy – and we worry about exposure to willys and bosoms. Really!

Well as you may know I have been having a technology meltdown. It was not really my fault, well I suppose it was because I allowed some already dodgy software to update itself, the result was the dodgy software became crazy software, that went on to enthusiastically contact all my subscribers, many times over to let them know of this and that and not much. I think it was software led spite aimed at my over confidence.

I have been teaching more technological subjects and was getting to rather enjoy it. All my students now have web server space that they can manage themselves and I can manage that space from home, helping them out remotely if required. I have had lots of help from more knowledgeable staff and IT at Hull but it was going so well I thought it was time to tinker with my own servers – so there you go – I broke them! and for a while it was rather like a runaway train – except I did not have the sense to stop stoking the fire – the more I stoked the more emails poured from the smoke stack, landing hilariously in the lap of my old PhD supervisor, Alistair who taught me everything I know about computing – ohh the shame!

Cancer wise, nowt to report. I continue to slowly deteriorate but intervention is there none yet, I am glad to say. I feel well and happy, so a slow rotting is nothing but the fate of us all – tee hee – so you might as well get used to it folks. The wonderful media correspondent Steve Hewlett – thanked me for praising his brilliant interviews on PM about his cancer – Definitely worth a listen – he says all the things I would like to say but as an experienced journalist he says it so well. Google him/cancer/R4

My boys and girls are doing fabulously well creatively if not financially – but who cares about that. Any hopes of sponging off them in our old age diminish in accord with their delightfully diminishing desire to do anything to earn money. One wants a camper van to hit the festivals and the other seems to be weighing up a career writing novels and looking after other people’s dogs in Spain. I do hope none of them disappoint by becoming sensible or worst rich.

Vincent the (not so stray anymore) cat is becoming choosy about the food we offer – no cheap tinned crap. I guess that means he is OK. He is still terrified of us but comes in at night to sleep and sometime sneaks in behind us to eat from the other cats bowls while we are preoccupied with a box set. Bobby is quite literally having hissy fits (is that where the term comes from) Mitch gives him a casual slap, (like a Mafioso style boss, impatient but caring with the new impetuous recruit, his nephew, Salvatore) but is largely indifferent. I predict by the New Year Vince will be in the house more than out, but I don’t think he will ever become a cuddly cat. His genes are screaming street and substance abuse and twocking. He has as a tick in his ear, which must drive him mad, but the chance of me doing my St Francis and ‘drawing it from out his ear hence,’ is zilch, as St Francis Newell would end up shredded or dumped in the river with concrete slippers. You can tell it’s like kitty Palermo in our garden at the moment.

Oh dear I have lost it – in a bid to seriously jeopardise my job this week I have started another ranting place. Contribute if you dare.

I am probably taking a few risks with this but the alternative is to bore all my colleagues with my constant anarchic ramblings about removing hierarchies and returning powers to the grass roots. Instead I have started to vent online and not over a latte. I know its childish, I know its ill informed and unfair but I am sorry I just cannot stop myself. Yes I am 14 again!!!!!!! and I love it. 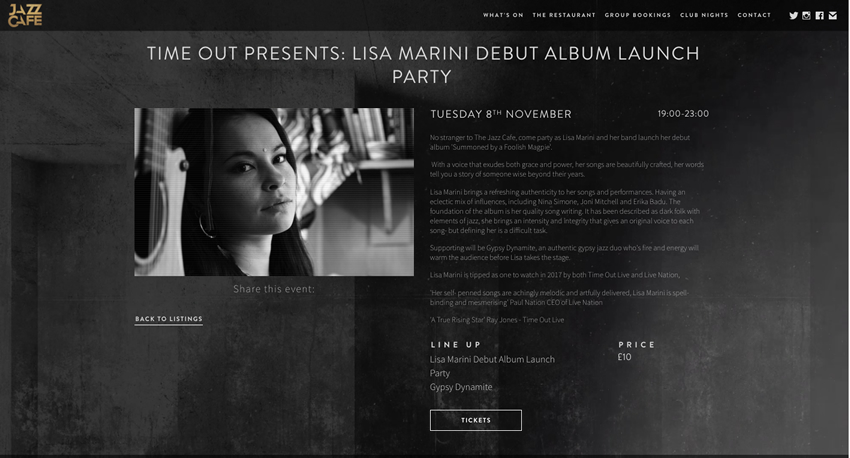 The gig is being advertised here

We are so looking forward.

This is Lisa Marini, Arthur Newell and Jack Tustin captured Live at StudiOwz. The album is launched in London on November 8th.

Maria and I have heard it in its rough state and we think it is exceptional. Amazing songs, singing and playing, some really innovative sounds and best of all the sort of album you really look forward to hearing again.

As soon as the album is released I will provide a link, but in the meantime forgive this gush of pride and love.

‘Peace by Piece’ written by Lisa Marini, taken from her debut album ‘Summoned By a Foolish Magpie’.