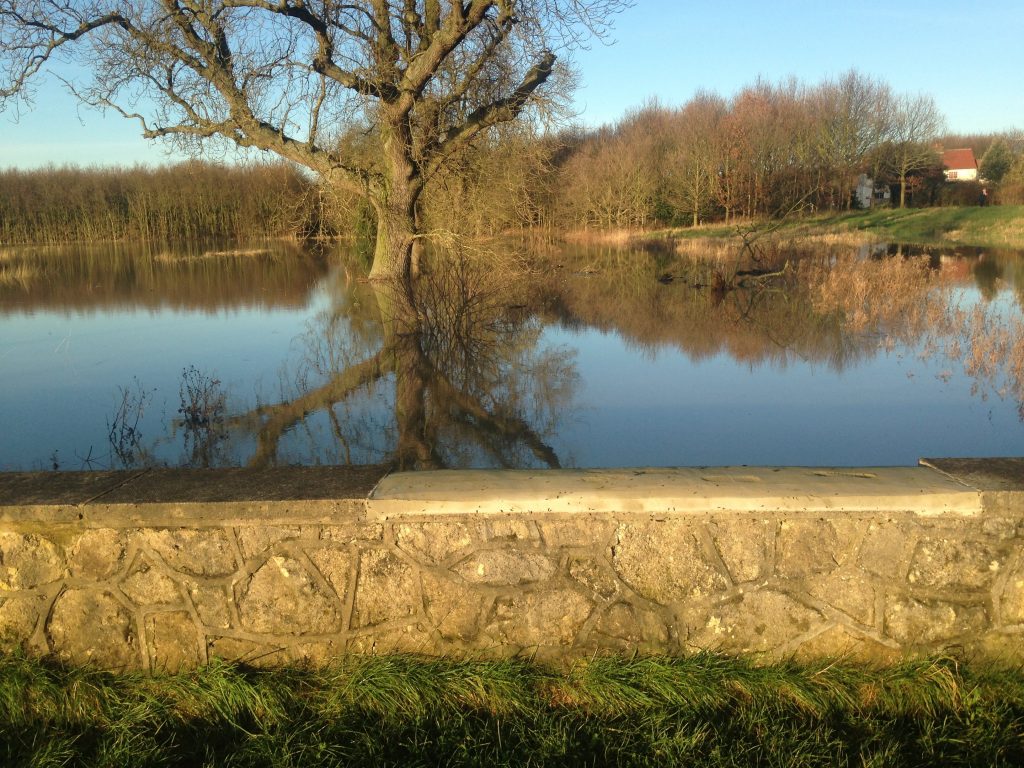 No we have not been deluged. We are cut off only so far as not wanting to drive through about 6 inches of water in case we break the cars, otherwise we have been fortunate. The bad flooding has been in the city centre and we feel sorry for the people who live near the Foss as normally it is protected by a big gate thing. This time that had to open the gate so water from the Ouse (the big river in York) flowed into the Foss (the little one) – result slightly less damage to those near the Ouse but very bad for those near the Foss. Poor them. Our stream which is normally about 3 foot wide and 6 inches deep is about 100 yards wide and 6 feet deep. See above –  Exciting for us, miserable for others.

I am very pleased to say things were good at the Amyloidosis Centre. Despite the fact that my numbers are progressing away from good, they are progressing slowly and there are no clinical manifestations. In other words my body is coping well. In fact all my crucial organs are coping well particularly my heart, which I gather is a bit important. The Amyloidosis spread has been arrested and it sits pretty around my liver which is none the worse for it. I don’t have to go back to June but in the interim there will be some further discussion about treatment options. They seemed pleased I was going to have the stem cell harvest.

The highlight was that I was seen by a young female Italian doctor from Bologna University. The oldest greatest medical institution in the world dating back to the 13th Century. Bolognese doctors were ridiculed in the commedia del arte and in the scripts for a whole bunch of Renaissance plays – usually on the basis of their incompetence, honesty or virility. In my pathetic efforts to flirt I explained this to her, but it must have got a bit lost in translation as she didn’t laugh.

Had a lovely and expensive meal in Hampstead. The restaurant had seen the likes of Hugh Laurie, Bono and whoever Charlotte and Lewis are. It was Italian great food and wonderfully non creepy waiters, who didn’t keep saying “is everything alright for you?”

While in the scanner I listened to the fabulous Sandi Toksvig who now represents the Women’s Equality Party, on Desert Island Disks – terrible music, great person, amazing party followed by Justin Welby the current Archbishop – I must say, having been a big fan of Rowan Williams, who really could have talked me into taking holy orders, this new bloke is a right plonker. Blimey what an establishment figure –. Mother related to or worked for Rab Butler and Winston Churchill, Eton, Cambridge, Oil industry, finance – God – nothing against establishment figures except when a) they prevent the LGBT community being treated equally (marriage) on the basis that other bigots in the Anglican Church wouldn’t approve and b) when they answer to the question – if there is a god why Ebola? is that people should trust in the love of Christ. I am sorry but what – what – what does that mean other than I cannot think of an answer so I will spout a cliché and hope for the best. Pathetic! Get rid of the second house if nothing else to get rid of the bishops and certainly this fella.

I think we were driven down by either a Buddhist or a Hari Krishna chap and back up by a drummer in a church gospel group so despite my constant moaning at God or the gods I think there might be a conspiracy to confront me with really nice people of faith just to undermine and make me feel bad about my personal bigotry.  Both drivers were excellent company and clearly kind people. Why do nice intelligent people so often have lashings of the god gene.