No transplant for now!! I am relieved to have a verdict as the uncertainty made it hard to plan ahead. Both consultants agree although the National amyloidosis centre would be a bit more gung-ho were they given the chance. So that’s that. For now…

This week I have been more than usually physically active. I can only ever do one thing at a time – either cerebral, technical, physical – I am in my physical phase with the telephone box which is approaching being watertight and well on the way to aesthetic completion. I then go into the technical stage which due to my modest programming and electronics skills could be very extended and finally the cerebral, creative fun bit. From which will emerge my ring cycle/unmade bed.

This stage is quite fun, although some of the DIY skills take some acquiring. Needless to say a good deal of me, the house and the garden is now painted red. The fact that it is the authentic red used on phone boxes prior to 1957 does not diminish it inappropriateness as a colour for grass, baths or indeed a very friendly sheepdog called Madge who came for a cuddle and returned to her owner looking like she had been in a Tarantino movie – I exaggerate a bit – actually her owner remarked that Madge always got covered in sheep dye when the sheep get their smit marks (coloured stripes) so this was nothing new. I have not enjoyed the puttying. Modern DIY materials take minutes or at worst hours to dry, real putty takes a modest 21 days before it can be painted – enough time to have constructed and painted an IKEA city. It’s been fun being nerdy about the bits and pieces I need to finish the job. A neighbour has very kindly made me a stand-in for the original light fitting a real one on eBay is £300 – even I draw the extravagance line at that.

Naturally I am supporting Jeremy Corbyn for the new labour leader and have acquired a vote as a registered supporter for £3.00. I really hope he wins as the rest of the field are a well meaning but uninspiring lot. I would prefer to vote for a woman but the two on offer are tainted by this tiresome move to the centre ground and may even be guilty of using that hateful phrase ‘hard working families’ YUK YUK YUK! I believe a real left wing alternative would bring about an adrenalin rush to British politics particularly for the young and those not yet terminally disillusioned like me. Besides which, Corbyn does not wear a tie and looks like he might like Jazz and Alan Ginsburg and expresso. The new leader of the Women’s Equality Party was on Woman’s Hour and was fab – she gets my vote if I ever reengage with the political hurly burly. I might. https://womensequality.org.uk

I appear for about 10 seconds on a radio programme on voice. I gave 30 minutes of my brilliance and have been ruthlessly whittled. Not good for the ego but excellent for the programme. I sound like I care which is nice but I am credited as a media theorist which I am not – don’t even know what a media theorist is. I would have preferred poet, husband and father, ebayer, anarchist, phone nerd, polymath, middle aged middle class git but media theorist is truly ghastly. Who wants to share a jacuzzi with a media theorist. The programme is really good but I have only concentrated on my bit. https://www.cbc.ca/radio/stripped/episode-four-lost-voices-1.3157977

That’s it for now. Today I have to seek out a plywood floor, a BSW tap and die set (bet you don’t know what that is), 4 glass panes, brass pins for the window frames and a backboard.

My new toy has arrived and is looking majestically decayed. 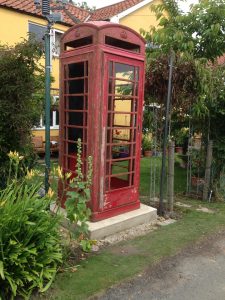 As you can see there is quite a bit to do but the good thing is its structurally in very good nick indeed and I have all the parts, glass, signs etc. It weighs 3/4 of a ton and came on a special lifter thing that after some messing about plonked it very neatly onto its base. It’s probably from the 1950’s or 60’s. I can find out as it has a unique number. The door opens onto the street, so that people other than us will be able to experience it. I have already had a very enthusiastic response from a passer by together with complete bemusement from Nonna who being Italian is seriously anti old stuff, particularly imperfect stuff that necessitates removing plants and any things that grow and can be eaten. Maria is an real enthusiast which is very nice and a bit of a relief given the disruption, cost, foolishness and current heap of rusty junk state. You may have guessed it is a significant part of my project the details of which will be known as soon as I have it properly underway. Don’t hold your breath, it’s a big deal for me but will no doubt disappoint my readers who may be anticipating something that’s actually good, meaningful, memorable and not about Chris –

One less regular hospital visit at least for now – hurrah and phew! Professor Cook and I discussed guitars, he has a bought a very posh one but has not told his wife, Scottish accents with speech recognition technology (he has one and uses it) hilariously bad – check this out https://m.youtube.com/watch?v=sAz_UvnUeuU and my health prospects. The verdict is no transplant for now but it is to be held in reserve. I am very happy with this outcome. I thought it was now or never, but it seems not. They may harvest my stem cells while the going is good but that’s no big deal – I just involves laying still with your arms outstreched like Jesus for 4 hours,  the transplant itself is a very big deal cos it can make you extremely ill and or dead, hence the year of deliberation and uncertainty. I am reminded that I have been keeping an opera DVD Charles sent me for my stay in hospital  I can watch it now. Charles I have also gone back to the Thomas Pynchon but can barely manage a page without glazing over with frustration at the hip language – What are they on about??? I am so sorry. Did you ever watch the Peaky Blinders I sent you and did you fancy the lead cos I did? I sort of want to be him – a gypsy bandit bad guy with heart of gold and fab accent.

Happily I feel very well, probably better than poor Maria who has a slipped disk, currently slipped back in I am glad to say. She is seeing a brilliant sports physio who does not talk tofu sandals or yogurt knitting. I will continue to have this stuff called Zometa every month but other than that I am good to go for however long until it comes back – hoping a good while.

So I can focus on my big project which progresses very well indeed but remains secret for now. We will be down in London in August for yet another outing for my our little melodrama ‘My Voice and Me’ at the Tete a Tete festival. Paul the composer is either in Chile or in China at the moment – the legendary spell checker strikes again. Paul where are you?

Life is good, boys and girl well and happy, cats lazy, hens have been sunbathing – yes they lie down as if dead on their sides and sunbathe – how weird is that. I feed them bread so they are getting tamer and tamer and more and more pushy. Arthur tried feeding and one of then nicked all his bread and ran off. I also witnessed them mating – not a pleasant sight while nibbling a corn on the cob on the balcony (me not them) – strewth nature is brutal.  I have my timetable for teaching next semester so – onwards and upwards toward reassuring hum drum.