So proud! So happy for them! What a great start. 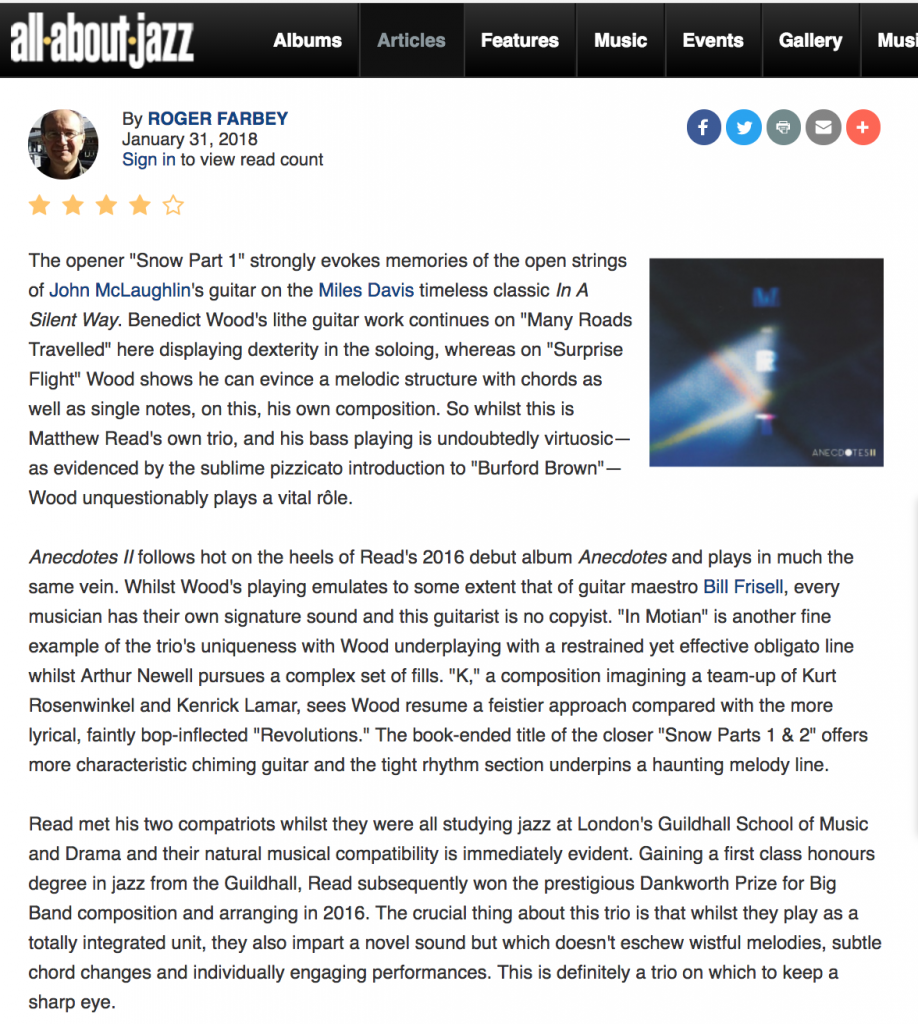 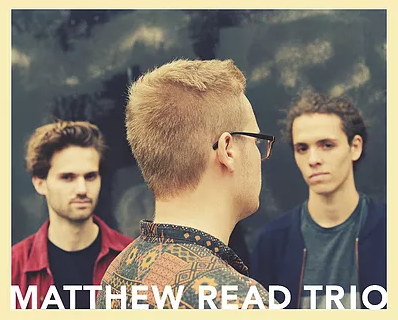 The Matthew Read Trio kick off their tour tonight with 2 nights doing the early set at Ronnie Scott’s.
Then they are zooming around the country playing music from their second album “Anecdotes Vol. 2”

Click here for tickets to the album launch party at Kansas Smitty’s on February 15th!

I am the hospital for a routine eye test for glaucoma so plenty of waiting time to compose a post.

As you know, dear reader, I disapprove of birthdays. I find them a bit of bore. That frigging repetitive greeting, the ghastly cards, the obligatory happiness, the cake, the meal, the pressies are ok, but in my view the whole birthday thing ruins a nice day, during which, with luck, the people you love are knocking around and you can party!

In an effort to address this I moved my birthday to Boxing Day and assimilated it into that other day that annoys me that begins with X. Anyway we had a brilliant family band session in the village hall with all my lovelies participating or enthusing. We managed to avoid all the tiresome birthday prerequisites and at sixty one I felt young and rebellious and ready to rock. Maria and I sung a duet – I was Robbie Williams to Maria’s Nicole Kidman in ‘Something Stupid’. I was brilliant, atleast in my minds ear. Relaxed, smooth, characterful with just a pinch of ironic twinkle! –  Footnote – I was not – I have a recording – starts ok – then a  sort of bee-gees virus afflicts me and as I ascend to ‘staying alive’ heights my tuning goes into first-day-of-the-Suzuki-violin-method-for-a-four-year-old zone. In an effort to correct this I step off the pitch cliff edge arriving at notes, less bat-like, but no less terrible. But it was fantastic fun and an opportunity to show off my new very posh birthday bass amp. Thank you Maria

Listen to this first – (no its not us) – I adore this song and this performance.

Now you can read this

Sixty one is definitely old. I am not a sprightly pensioner in slacks springing from one three peaks race to a triathlon followed by a yoga class. I am old knackered with an elastic waist band balloon belly and very proud of it. Our compulsory worship of those oldies that ‘survive’ as if they are an endangered species of marmoset really annoys me. The old are currently messing things up for the young and the sooner they bog of the better. Except me.

Speaking of bogging off and given that I am writing this in a hospital which is traditionally ‘the last port on ones life cruise,’ when I die I want to be a tiny bit useful. There seem to be two choices that appeal to me. One is a new machine that liquifies and blends bodies with a sort of bio yogurt and then flushes the result into the sewage system or sprays it, silage like, onto the fields to enrich the next crop of edamame beans. It is such a grotesque idea it appeals to my sense of the absurd and my reluctance to endorse the idea of dignity in death. Being dead is not anything at all – it is certainly not dignified.  Being blended in a juicer and flushed down the lav or sprayed about like a goolish jet wash sounds like a Steven King outtake. However the idea smacks of ‘green’ conscience and that is something I would struggle to claim. My Auntie Barbara worked in a hospital in a cancer department. She died of the disease and being an insider she donated her body to ‘the cause.’ This seems like a good thing, besides given the rarity of my condition I reckon the medical students will be racing for their scalpels.

Nonna has a different attitude to death. A recent brush with a stomach virus not only elicited (from us) an obsessive installation of video cameras around her house so we can see her if she has a turn (she was very poorly) (she has been warned not to disrobe, as is her habit, on the landing) but also the purchase of two sets of in-the-coffin footwear from Amazon Prime. Both in black. One styled for winter – more robust, less slippy on the ice and the others, sandals, for summer, black but strappy and cool. While Maria and I appreciate the need to have the right footwear for every occasion the price, £70 for each pair for just one wearing, did seem excessive. Still it makes her happy and us laugh – privately.

We don’t grumble, we don’t worry about a lot
Oh, when will you stumble, you stumble into my arms
And when you kiss me, don’t you realise
That my heart’s like a big balloon
And like the lovelight in your eyes
They can’t black out the moon