As of yesterday my blood numbers are ‘spot on’ – quote – so for now I will declare myself well!!! Hurrah.

I will be at the National Amyloidosis Centre on 4th and 5th of March for more running up and down the corridor and lying in state in machines with pretty girls and charmless Australians. Then my situation will be reviewed and the question of the transplant will be settled for a bit.

Maria and I celebrated by watching an episode of ‘The Sopranos’ – you know the one where the Mafia boss dies of cancer!

I have resolved my political sympathies are located somewhere between anarcho-syndicalism, anarcho-libertarianism, anarcho-individualism and the Greens – oh and maybe I will vote Syriza in the forthcoming election or if really desperate Labour. I now support the Jewish Women’s Archive in order to get a $5 poster of Emma Goldman, my current political hero and obsession. 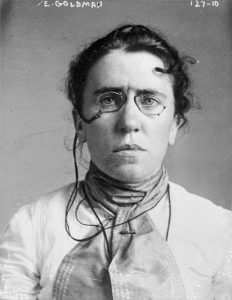 This anti everything Epiphany coincided with a serious outbreak of materialism. I confess to an addiction to Amazon Prime and the list of gadgets and goodies I have purchased in the last few weeks is shameful. A packet of tweezers, a leather sandbag, black and white film, woodworm repellent, screwdriver (tiny), tv adapter thingy (did not work), tv adapter thingy 2 (did not work very well), first aid cabinet (family size) and a dental mirror. Ebay has been similarly favoured by my clientage mainly aimed at skewering the rat – yes I have bought a movement activated security light to scare it away (fat chance) and I am seriously contemplating a night vision security camera so it can capture some selfies with rat celebrities. It is unbelievably persistent having dug around 8 holes and shifted various heavy obstacles to avail itself of our inside loft toilet and deli. Oh and big confession I purchased an anarchist badge – was going to keep this quiet – as it is so pathetic – but having revealed it to my nephew I have decided to fess up. Maria won’t wear hers as it’s childish. REALLY AS IF!!

My anarcho materialism is matched by my continuing enthusiasm for fixing stuff and rediscovering my legacy of meaningful objects. Thus I have restored my mums paint box, hence woodworm killer, displayed by Dad’s City medal, my Grandad’s war medals, my maternal grandmothers gold watch, my great uncles numerous curios, my dad’s leg (false), a bunch of photos of us lot, my father-in-laws watch, my corgi cars, my camera collection, a lonely pink teddy, a microscope and a tallow candle that looks like dog pooh, oh and loads of other stuff discovered in the loft in pursuit of yes – Ratty! A few disasters including this fix to the IKEA roller shutter effected with a Stanley knife and brute force. 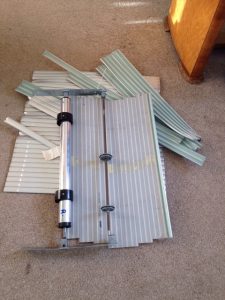 The really good news is that I have written the words to a set of songs for voice and ventriloquist doll. My mate Paul has agreed to write some music so I am really pleased and excited – I have tried to sell him a few ‘dogs’ recently so I am pleased he thinks they have potential. The key to writing song texts seems to be to leave space for the music. If they work as poems they probably won’t as songs – so bad poetry really – I seem to have cracked that. My Pier poem for the Stephen Hawking voice and nostalgic sounds is nearly finished and I will post it in the next few days.

Love and Syriza don’t mess it up, to you all xx 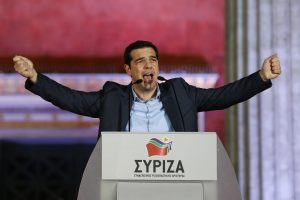