My target was 4 somethings over up to 3 days and I achieved 8 somethings in one day!

The doctor said I had done really well. I felt like I had actually won the egg and spoon race at Eynsford County Primary instead of coming second to last (only the boy with permanent conjunctivitous was slower) – and I dropped my egg.

It is so to be recorded that I am a positive superman at producing stem cells. The nurse was right, it did hurt but it was worth it. The best bit is I don’t have to go back again and I can dispose of (I said chuck out but was corrected) all my stem cell simulation drugs and syringes Hurrah, hurrah, hurrah. They have an absolute bucket load of potential me’s – enough to repopulate the Isle of White at least.

The whole process was not too bad actually – at first the pumping bone pain is quite intense – it really does feel as though your bone marrow is being pumped out your backbone, but plain old paracetamol works very well and you get used to it. The blood goes in one side and out the other. The outlet is your biggest vein in the crook of your arm and I must admit the needle is on the big side. Note size of outlet wound compared to inlet wound 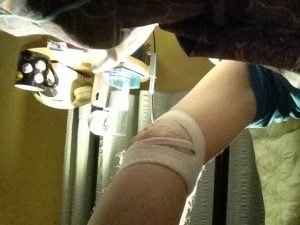 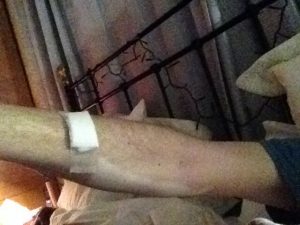 The reason you can’t move your arm, as was so vividly explained by the nurse, is that the needle stays stuck in your arm and were you to bend your arm it would pop clean through the vein and out like a friendly meerkat. Luckily in my case the inlet was a titchy little cannula (sp) with a plastic floppy needle thing leaving me free to wave to the crowds or sup tea. Tea is not advisable though for reasons already stated.

The one weird but painless side effect is your lips tingle. This is caused by the machine using up your calcium somehow and is counteracted by some nice fruit flavour calcium tablets – I had 6 in all.

I had a nice lady from Scunthorpe next to me also with Myeloma and also with the same pounding pain. She had thought it was her arthritis in the same way as I thought it was computer shifting. We talked about her dogs, a border terrier cross that stole the Sunday joint and a Jack Russell that bit the vet, and regaled each other with tales of laxatives.

As ever the care was exemplary with one nurse assigned to each patient. They have to tweak the machines, which look and sound like very high tech twin tubs, in order that the ‘layer’, a very thin layer in the blood where the stem cells reside, is skimmed off by the centrifuge. They do this by peaking into a sort of viewing hole- a bit like a seaside what the butler saw machine – and tinkering with numbers. This continues intermittently throughout the day punctuated with an enormous amount of note taking. I do hope someone reads them. Heres an interesting fact. As you know for any procedure the patient is obliged to sign a consent. My nurse said that in all her 14 years no one had ever refused to sign. Is it just possible that this little bit of bureaucracy is a waste of time and money. Wouldn’t it be easier for consent to assumed unless someone says so.